Then and Now: What Was and What Is 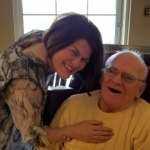 It is an odd demarcation in the timeline of my life – before Alzheimer’s and after Alzheimer’s – especially since the after part has not really occurred yet. Since Dad’s diagnosis, first with short-term memory loss, then with dementia, and finally with Alzheimer’s, I find myself looking at my life as Sam’s daughter in two dimensions: life as his daughter and life as his caregiver. The honest-to-goodness truth that I want to share with all children who become caregivers to their parents is that while you may see lines of separation between the two worlds, there exists more overlap than disjunction. Thankfully. You will undoubtedly compare the “then” to the “now” and the “what was” to the “what is”, and that is okay. However, don’t allow yourself to become stuck in the past because you will learn as I have that the “is” needs to be and is so much more important than the “was.”

My father before Alzheimer’s

What was my father like before Alzheimer’s? What was the father-daughter dynamic like before this dreaded illness? What was life like before the man who raised me, loved me, protected me, and taught me to live with authenticity and integrity was robbed of his memory, his ability to care for himself, and the world that he helped make a better place? Dad was a husband who adored his wife, the woman who also happened to be his childhood friend and first love. He was an involved and interested father and grandfather, fiercely proud of his progeny. He was a community leader who put a small town on the map as he developed with vision parks, beaches, and youth and adult recreation programs. He mentored many. He motivated many. He served family, friends, and community with unwavering commitment and compassion. Above all to me, he was my support, my hero, my first love, my confidante, and the man who taught me to look at the world through the eyes of a problem-solver and not just a critic. Sam, my father, knew how to get things done and how to make others feel that they too had something to offer to the world.

Who my father is now

So, after Alzheimer’s (or I should say since Alzheimer’s because it has been “the longest day” ever), what has changed? Everything. And nothing. I think of all that he had accomplished in his life before the ugliness and the sadness of the Alzheimer’s moniker became linked to his biography. Those who knew him were blessed. He was blessed. I was blessed. And this is what I know now: there is no before or after with this illness because what matters most is that which endures — the blessing of having him in this world. Yes, my role is a bit different now. I’m his caregiver, his advocate, and his voice. However, what our relationship was, that of father and daughter, still is. What was before Alzheimer’s and what is now since Alzheimer’s is the main thread holding the fabric of life together for us. Love.

How truly lucky I am to care for him as he has done for me in so many ways all of my life! Then and now, he’s always my dad, and I’m always his daughter. Alzheimer’s cannot steal that bond. Ever.