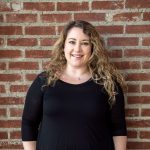 My first Walk to End Alzheimer’s was in 2012. At that point several years into my Grandfather’s illness,  the Philadelphia Walk to End Alzheimer’s provided me with a way to fight this disease. I mobilized my family and started fundraising, perhaps a couple of hundred dollars at most. What was important to me was to get there — and this would be the tough part — with my Poppop.

To start, Poppop was never a big city person, so that was not a mark in my favor. Another one, my Grandmother, his primary caregiver, was not in the best shape herself, so she would not be attending. But Grandpop was in good physical health and could do it. I just had to ask Grandmom. I was apprehensive, I talked really fast, too fast, and when I finally stopped talking long enough for her to answer my question, she said yes!

In taking on the responsibility of Poppop in a public space with which he was not familiar, I knew I was going to have my hands full. I worried about every detail, but the one that perplexed me the most was what if he had to use the bathroom? At the time, he was still fairly self-sufficient, however, I did not feel comfortable sending him into a men’s room alone. And despite having more than a dozen family members, I had only enlisted a few of them to go to the event — all of them girls.

So I gave my cousin Taylor a call, asked if he would be willing to join us and specifically that I would need him to go where I couldn’t — the men’s room. Thankfully, he agreed!

Walk day was a brisk fall day that had us all wearing sweatshirts. When I picked up Poppop, he was in good spirits, if a bit apprehensive about what we were up to. Beyond myself, Taylor and Grandpop, our team also included my two sisters, Christine and Cheyenne.

The crowd at the event was something I knew Grandpop would not be a fan of! I distracted him with statues of Phillies past and a grand Christmas tree in front of the ballpark. We took turns posing with the statue and shot a family photo in front of the tree. 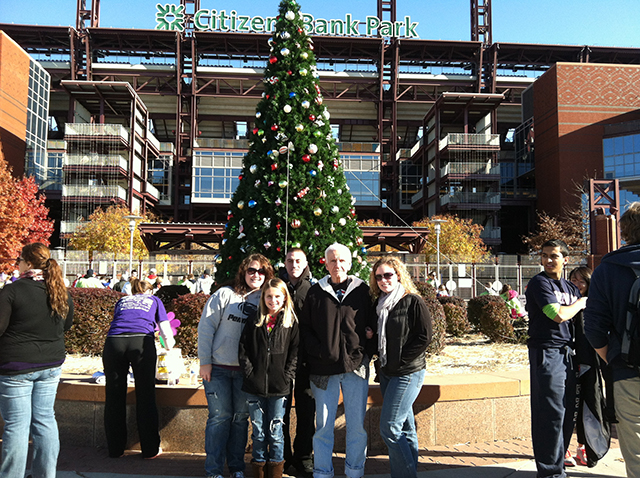 While I had prepared to deal with a great many things, the wind was not one of them! This walk day was particularly gusty. A picture of Taylor and Cheyenne waving their hands around like the blow-up men in front of car dealerships attests to that — and in the background is Grandpop, unimpressed and annoyed.

The walk we accomplished that day was only a portion of the full walk trail, a brief loop before breaking off from the pack and taking refuge back in the car. But it was enough. My heart was full. As we pulled out of the parking lot, I said words that have always brought a smile to Poppop’s face “How about we stop for some ice cream?”