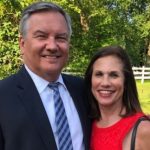 Joan never made her European cruise – and we moved her in with us in Pennsylvania. She had visited multiple times over the past 15 years, so she was comfortable with the house and surroundings. It was still a major change – moving from her own home in southern California to the suburbs of Philadelphia. The weather would play a role going forward.

In the first few days after Joan moved – it was obvious she had lost memory. She had forgotten about being lost and found. She did not recall sleeping in her car. She had also forgotten she had booked a trip to Europe. She was defiant and argumentative. She began blaming others for making up the stories. It was clear she had no recollection of what transpired. It was also obvious to us that we would be required to take her driving privileges away.

Within the first week in PA a good friend agreed to accept her as a patient in his family practice. The doctor has extensive experience with people with dementia. Her first appointment was revealing. The doctor performed simple cognitive testing. Questions and recall. Mostly simple questions, the ability to remember and social skills. His observation was that Joan had lost a significant amount of cognitive functions.

The doctor recommended medications for dementia, bone-density, and anxiety. He said to us that these medications may help some – but unlikely to have long-term effects. He also suggested a visit to a neurologist. Otherwise healthy – his expectation was that she would slowly get worse and driving was not an option. His thought was her inability to recall being lost and found – may have been caused by a TIA (mini-stroke) and to blame him for the driving privileges being revoked.

My mother, Joan, was a very independent woman. We knew this was going to be a challenge. We explained to her that driving is no longer an option. Her new surroundings would be confusing. The driving rules in PA are different. The roads are narrow and winding. Her ability to understand directions and know where and how to get places was gone. Quite frankly, she would be a danger to herself and others.

As expected, Joan fought back and argued. Her responses were typical of the elderly. A very safe driver, no accidents, been driving for 60 years and no traffic tickets. If she had known she would not be allowed to drive she would never have agreed to move. We held steadfast against her wishes. We told her that wherever she wanted to go someone would take her. She had the best of all choices – she would always have her own private-driver. If she was adamant about driving, she would need her doctor to approve it. She never asked him, and about 4 months later she never said another word about driving a car. Today she realizes she can no longer drive.