Alzheimer’s disease progresses in stages, and although it is often broken down into three stages (early, middle, late), there is an alternate staging system as well. Dr. Barry Reisberg from New York University (NYU) developed the Global Deterioration Scale (GDS), also called the Reisberg Scale, which consists of seven major clinical stages.1,2 This can be used by clinicians and care settings. Either staging system is correct, but some clinicians use one and not the other.

In the GDS, the seven stages are further classified into two different categories: Stages 1-3 are considered the pre-dementia stages, and stages 4-7 are the dementia stages.3 Starting at stage 5, an individual cannot survive without help.3 This scale may be especially helpful for caregivers, as it is noticeably detailed regarding the general abilities of an individual at each stage and provides information about what to expect at different stages. 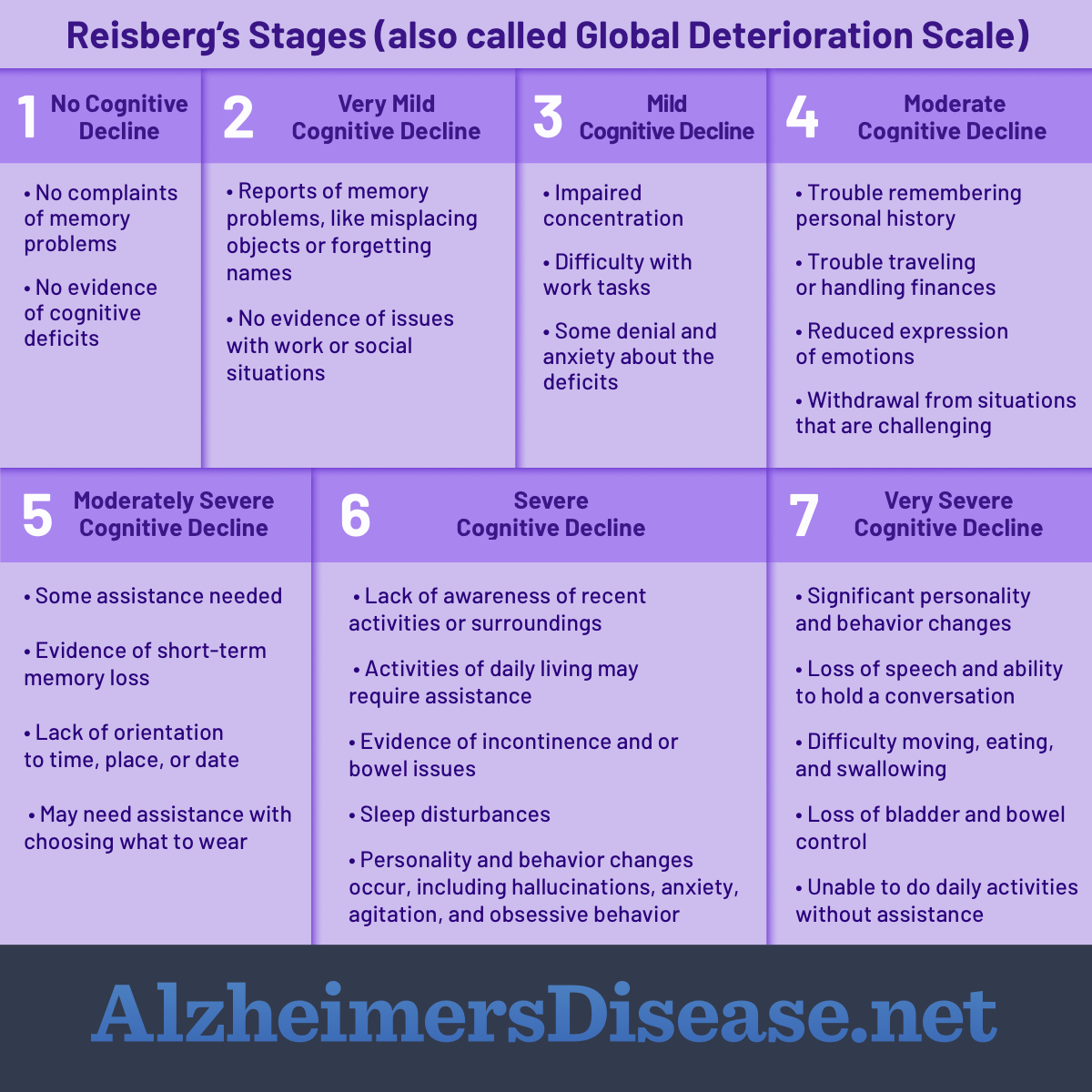 In this stage, there are no complaints of memory problems and no evidence of cognitive deficits upon examination.3

There are subjective reports of memory problems, like misplacing objects or forgetting names. There is no evidence of memory issues during a clinical interview or problems with work or with social situations.3

This stage is when cognitive deficits start to become apparent. A person might get lost going somewhere new, coworkers might notice a decline in performance, or the person might read something and not comprehend it. When clinically tested, the person’s concentration may be impaired and memory issues might be noticeable in an interview. An individual might find it harder to keep up with a demanding job and start to have some denial about memory issues. There is also often some mild to moderate anxiety about the deficits.3

In this stage, there is a lowered awareness of current events, there may be a memory deficit of personal history, and trouble with traveling or handling personal finances. Denial is typically stronger at this point, and there is often a flattening of affect (reduced expression of emotions) and withdrawal from situations that are challenging.3

At this point, a person cannot survive without some kind of assistance. During an interview, a person might not know a major piece of current information about themselves, like their address or names of close family members. Major life event information, however, is still intact. There is often a lack of orientation to time, place, or date. While a person in this stage doesn’t usually need help toileting or eating, choosing what to wear might require assistance.3

In this stage, a person with Alzheimer’s might forget a spouse’s name and are mostly unaware of current events or events and surroundings around them. Counting to 10 (and counting backward from 10) may require assistance. Activities of daily living may require assistance, and incontinence may occur. Sleep habits are often disrupted at this stage. A person usually still knows their own name, and can differentiate between familiar and unfamiliar people around them.3 Personality and behavior changes start to happen during this stage and can include: delusions, hallucinations, anxiety and agitation, obsessive behavior, and a loss of will.3

At this point, the individual begins to lose their speech and may just have guttural sounds. Toileting and feeding require assistance, and the ability to walk begins to decline. There is a marked disconnect between the body and the brain in this stage, and the individual has a general rigidity to them.3

This staging system might not line up completely with every person’s experience with Alzheimer’s disease. This is a global scale and doesn’t account for individual differences and variations. Talk with the person’s doctor about the scale, and if desired, how it might be incorporated into the diagnosis and treatment plan.3