In the early stages of Alzheimer’s, patients may experience a variety of symptoms that seem like normal aging at first. As these symptoms occur more and more, loved ones might suspect there might be something else going on. One of these symptoms includes changes in mood or personality. Patients might notice people reacting differently to them, or find themselves more depressed or agitated, for no good reason. People might tell those with Alzheimer’s disease that they don’t seem “like themselves.”

If you’re noticing things like this with yourself, see your doctor. It is common in Alzheimer’s disease, even in the earlier stages, for individuals to have personality or mood changes. There are ways of treating and coping with this. Check with your doctor to rule out other medical conditions, like a stroke, or an adverse reaction to medication.

Mood and personality changes in Alzheimer’s

When an individual with dementia or Alzheimer’s disease starts displaying changes in mood or personality, it’s usually due to neuron loss in certain areas of the brain. Neurons are a kind of brain cell, and Alzheimer’s destroys brain cells. The personality changes or other symptoms are usually indicative of where the damage is occurring.1 In the early stages, the symptoms are mild and might even be seen as passing moods or situational mood disturbances; as time goes on and the disease progresses, the changes in mood and personality become more pronounced. The figure below shows brain areas associated with behavior and feelings. These brain areas, the frontal lobe and temporal lobe, become dysfunctional in Alzheimer’s disease.

Figure 1. Lobes of the brain associated with behavior and feelings 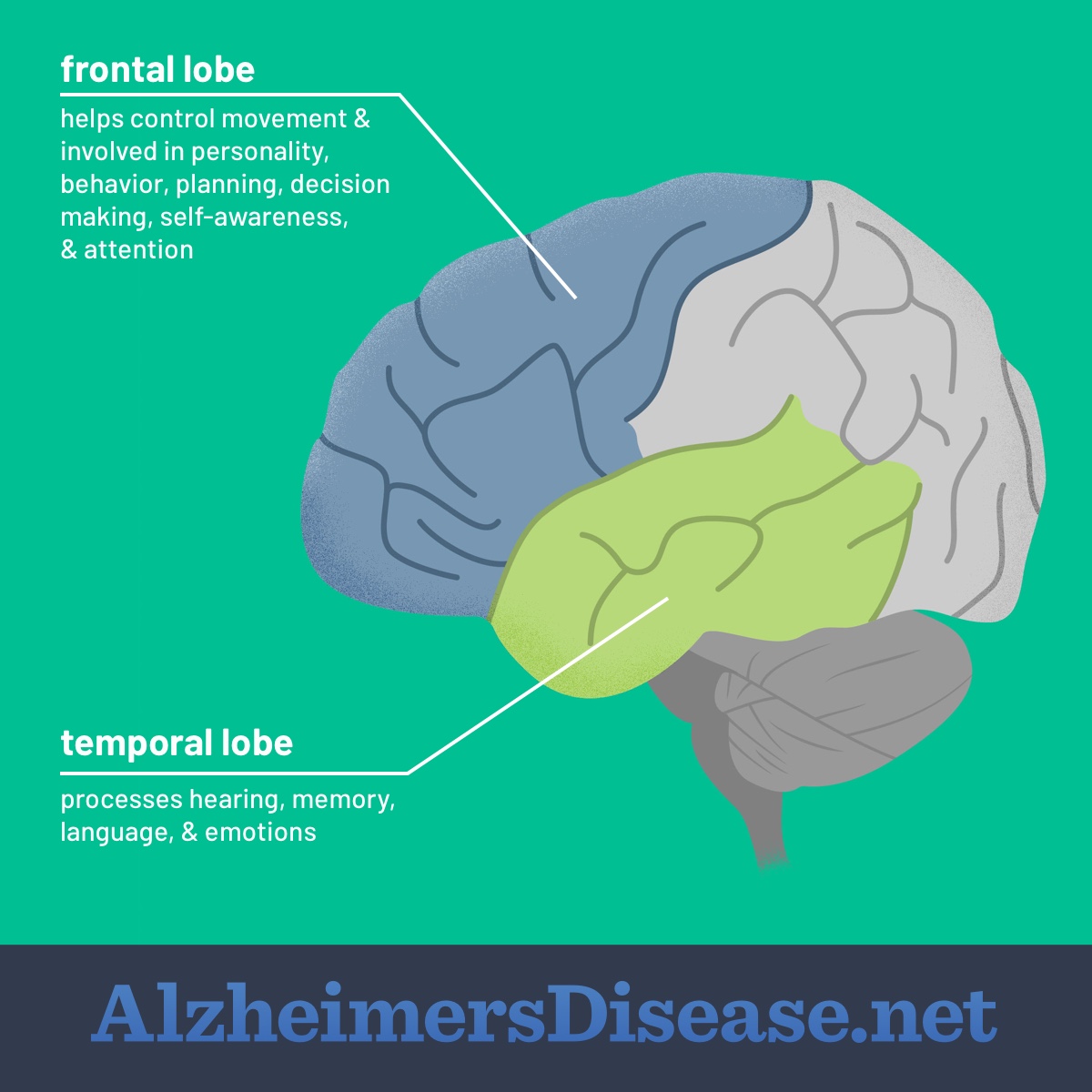 While the changes in mood or personality might be obvious in some people, it might start off in subtle ways in others. Common changes include1, 2:

People might also report that they’ve noticed “sundowning”. Many people with Alzheimer’s disease experience sleep disruption, which impacts brain and behavior, especially increased agitation, anxiety, or even aggression, in the evening hours.3 Causes may also include exhaustion from the end-of-the-day, less light/more shadows may cause fear or confusion, and disorientation.3

First, patients and caregivers will want to rule out any other causes for changes in personality or behavior, so a doctor should be seen for a full medical workup. Things that can affect behavior or personality include stroke, adverse reactions to medication or medication interactions, pain, or problems with vision or hearing.4 Being in unfamiliar situations or having a lot of changes taking place, such as moving primary residence or going to the hospital, can also be triggers for mood or behavior.

While there are medications to address mood and behavioral changes, non-drug treatments are usually tried first. These can include modifying the environment to avoid multiple changes or triggers, assistance with frustrating situations like toileting or eating, keeping a calm and supportive environment, and encouraging social engagement.4 Depending on the specific mood or personality changes, there may be medications that can be helpful. Cholinesterase inhibitors, the first-line treatment for Alzheimer’s disease, can help with some of the behavioral symptoms. Antidepressants can help address depression and irritability; anti-anxiety medications can ease anxiety or disruptive behavior. Antipsychotic medications may help with aggression, agitation, and hallucinations or delusions.4 Benzodiazepines (Xanax, Ativan, Valium, for example) may reduce anxiety symptoms. There are major risks to using any of these medications, so it’s best to go over all of the risks and benefits with your doctor. A neurologist or a geriatric psychiatrist can also be helpful since they are well-informed about the best treatments for older individuals.

While mood and personality changes in Alzheimer’s disease can be difficult for everyone, there are ways to manage these changes and help to make things as easy as possible. Patients and caregivers should talk and plan head regarding what they’d like to happen and how things should be managed when the need arises and discuss treatment options with the doctor or treatment team. Caregivers might also think about receiving help to manage these behavioral symptoms.