Christmas Without Daddy: Dealing with Holidays After Losing a Parent

No one can ever quite explain how hard loss is to someone who hasn’t been there. If you haven’t lost a parent, you don’t quite know the pinch, ache, and discomfort of those shoes that many of us have been forced to walk in. It’s every bit as bad as you’d suspect plus a little bit more. Holidays can be especially hard when there’s an empty chair there. No one can ever fill a gap left by a parent who has passed on, but, personally, we tend to take turns taking up a little of the slack as their children.

Daddy had no joy quite like watching his children then his grandchildren open Christmas presents. The man did look a whole lot like Santa Claus, after all with his rotund belly and white beard. The last few years he was here with us, he couldn’t really get out and do big shopping trips but made sure that I took care of it on his behalf. Having had six kids, you can imagine that his shopping list grew to be pretty long. He gave me money that I stretched to make sure everyone had a present from “Papaw.” He wouldn’t have it any other way. 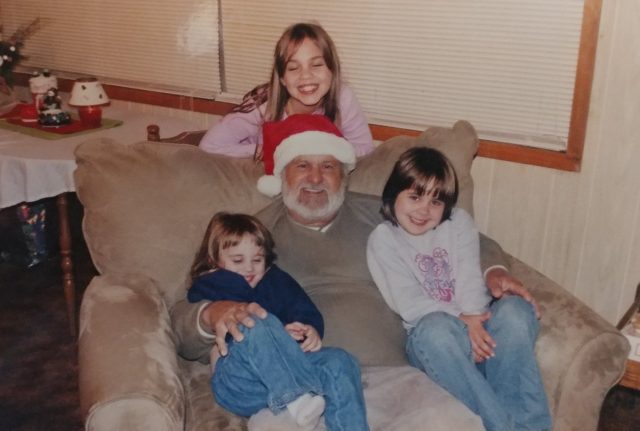 With the holidays came Daddy’s famous lemon pies. I found an old receipt when I cleaned out some of his things. The piece of paper seemed as long as my arm, listing pie crusts and lemon juice, whipped topping, and sweetened condensed milk.

I knew for a fact, that the timestamp on the receipt marked a day on the calendar when Daddy would have had huge bowls spread out on the kitchen table with the roar of the kitchen mixer buzzing away as he did his handiwork.

His pies started out great, and as the years progressed they tasted less and less like lemon and more like whipped cream on a graham cracker. We made a few inside jokes about it, but we all came to expect the pies and gobbled them right up. It wouldn’t really be the same without them. So, I’ve taken up that torch, mixing up a lemon pie or two occasionally during the season. The scale isn’t as large, but the tradition carries on.

Daddy’s last Christmas came shortly after his brain hemorrhage. He was in rehab in a nursing facility here in southwest Tennessee. We decorated his room with a few shiny Christmas things and a tiny little tree.

We visited him for Christmas dinner. This period of time didn’t exactly include his finest moments. He hadn’t done a whole lot of recuperating yet, and was often upset or confused. I do think Daddy almost always knew we were his even when he may not have known us specifically by name. We didn’t care for him and decorate his room, though, because he remembered who we were. We did everything we could to give him a good holiday because we remembered who he was.

We recalled the decades worth of Christmases that he made good for us. The least we could do was attempt to return the favor in some minuscule way. When he may not have been able to fully remember who we were, it was immensely important that we remembered whose we were.

The grief that follows the loss

Sure, sadness comes. It never goes away entirely, especially during this time of year. When I think of Daddy, though, I don’t think about sad things as much as the happier ones. I think of his big goofy smile and bushy eyebrows bouncing up and down. I think about the year he had me make “stewed raccoon pie” labels for his pie lids as a prank. I think about his chocolate-covered cherry habit. I think about the eight tiny reindeer that he jigsawed out and painted that sat on the coffee table every year when we were growing up. I think about the good times.

I saw a meme a few days ago that basically said that you can talk to someone about someone they have lost. You shouldn’t hold back for fear that you will remind them. They haven’t forgotten. We haven’t forgotten. I think the best things we can do for Daddy now is carry on his memory, tell his silly stories, hug on his grandbabies, and make his pies.

Blend condensed milk, lemon juice, and whipped topping together in a bowl with a mixer. Use an extra large bowl for extra splattering room. Pour the mixture into the pie crust. Freeze until set or indefinitely. Repeat about 27 times. Affix ridiculous label to the pie lid. Distribute to family and friends with the biggest grin you can muster.