How Does Alzheimer's Disease Develop?

Alzheimer’s disease is a neurological disease, which means it affects the brain. The brain is an organ that weighs approximately three pounds, yet controls all the functions of the human body. It gets information from all of the senses and then puts them together in meaningful ways and stores information in our memory. In order to better understand what happens in Alzheimer’s disease, knowing some basic information about the brain can be helpful.

The brain has three main parts: the cerebrum, the cerebellum, and the brainstem. It is part of the central nervous system (CNS), along with the spinal cord.

Figure 1. Main parts of the brain 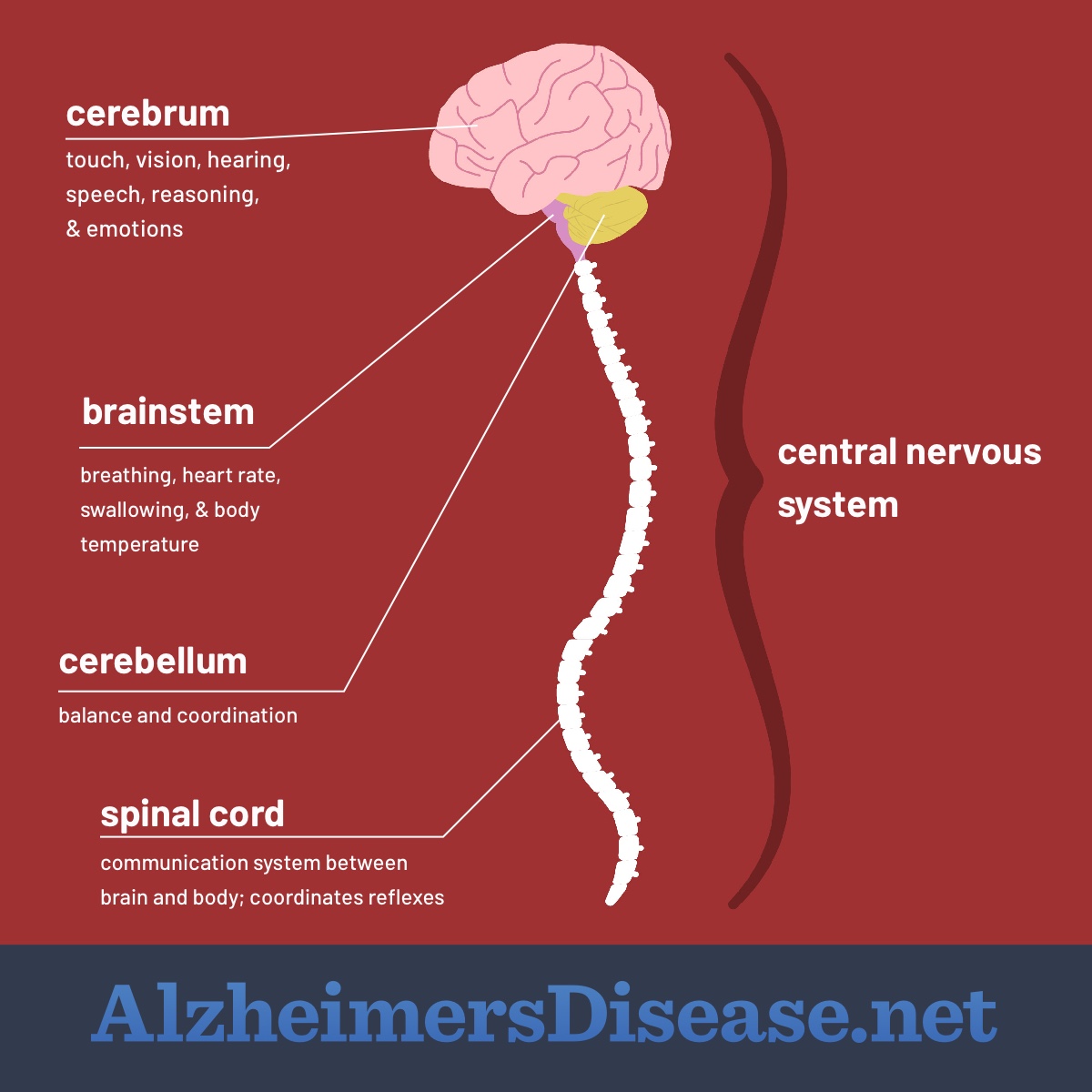 The cerebrum is the largest part of the brain and is involved in higher functions like touch, vision, and hearing, along with speech, fine motor movement, reasoning, memory, and emotions.1 The cerebellum coordinates muscle movements, helps maintain posture, and aids in balance.1 The brainstem coordinates automatic functions like breathing, heart rate, swallowing, wake and sleep cycles, digestion, and body temperature.1 It also connects the cerebrum and cerebellum with the spinal cord, acting as a sort of center of communication between them.

Lobes of the brain

The outer layer of the brain is called the cortex and is divided into four lobes, with each lobe serving specific functions. When cells in a specific lobe are damaged, different functions will be affected. The lobes of the brain include: frontal lobe, parietal lobe, occipital lobe, and temporal lobe. The functions of each lobe are below1:

Figure 2. Four lobes of the brain 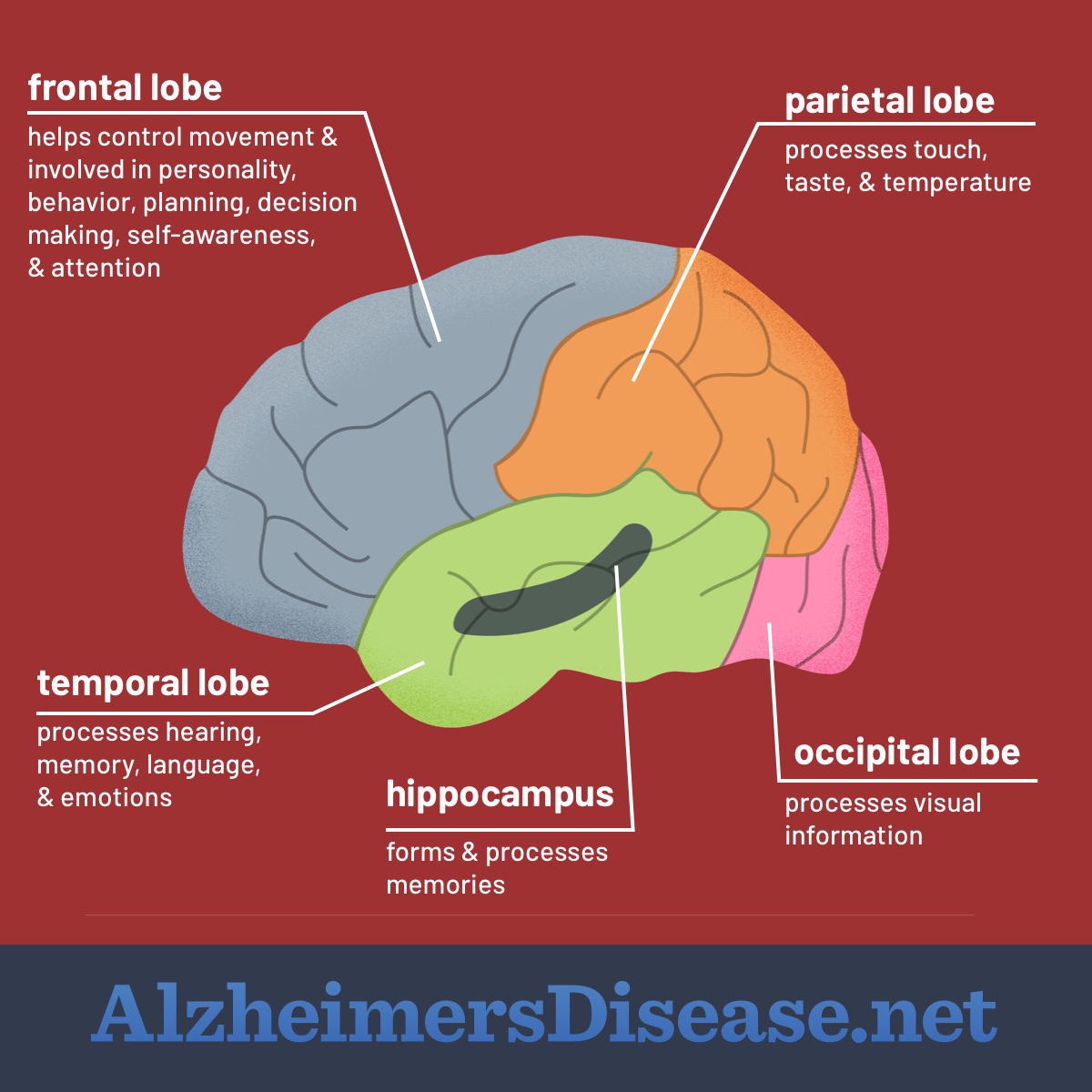 The brain contains millions and millions of nerve cells called neurons that process and send information through signals.2 These neurons also send messages from one body part to another, and send messages from the brain to different muscles and organs in the body. Neurons are constantly communicating with each other and sending chemicals across small gaps (called synapses) between each other. In order to stay healthy, neurons have to break down chemicals and nutrients in a process called metabolism.2 They also stay healthy through repairing and remodeling themselves. Unlike other tissues in the body, neurons cannot be regenerated and there is minimal production of new neurons in the brain after birth. When Alzheimer’s damages these nerve cells, there is no recovery. Loss of these neurons causes brain areas to become dysfunctional.

How does Alzheimer’s disease affect the brain?

While some brain shrinkage is normal with aging, it is not normal to lose a lot of neurons or sustain damage to large swaths of neurons. Alzheimer’s disease, on the other hand, causes damage to large areas of the brain and impairs neuronal communication, metabolism, and cell repair.2 It usually originates in the areas of the brain responsible for memory, then, later on, affects areas involved in language, emotional processing, reasoning, executive function, and social behavior. As the disease progresses and destroys more and more neurons, basic abilities to live and function independently are affected, with a fatal outcome.

Currently, the only definitive way to diagnose Alzheimer’s disease is on autopsy, when the brain tissue can be examined. There are molecular and cellular changes that occur, including amyloid plaques and neurofibrillary tangles. Chronic inflammation and vascular changes may also be seen. An active area of medical research includes ways to diagnose Alzheimer’s disease, particularly early in the disease process.

Amyloid plaques are molecules that clump together between neurons, formed from the breakdown of a protein called amyloid precursor protein.2 Abnormal breakdown of amyloid precursor protein produces fragments of this protein called amyloidß that clumps together between neurons, disrupting cell communication, function and leads to neuron death.

What are vascular issues?

Many people with Alzheimer’s disease also have other changes to their brain, including vascular issues. If there is any kind of vascular issue, like a mini-stroke or hardening of the arteries, this can lead to a breakdown of the blood-brain barrier, leaving the brain vulnerable to harm. If the blood-brain barrier is compromised in someone with Alzheimer’s disease, glucose doesn’t properly reach the brain, which stops it from getting rid of beta-amyloid and tau proteins, both of which are toxic to the brain in excess amounts.2 This, in turn, causes more inflammation, which contributes to vascular problems – and the cycle continues.

Medical research is focused on identifying changes to the brain early and discovering new treatments to stop progression of Alzheimer’s disease.

How Are Illusions, Delusions, & Paranoia Related to Alzheimer's Disease?