What Are the Stages of Alzheimer’s Disease?

The stages aren’t always discrete; they can overlap, so it’s not always easy to see where one falls on the spectrum of the disease. If a patient has any questions about their stage of disease or the progression of their Alzheimer’s, they should talk with their doctor. The doctor will be able to speak with the person about their specific symptoms and what might be expected. 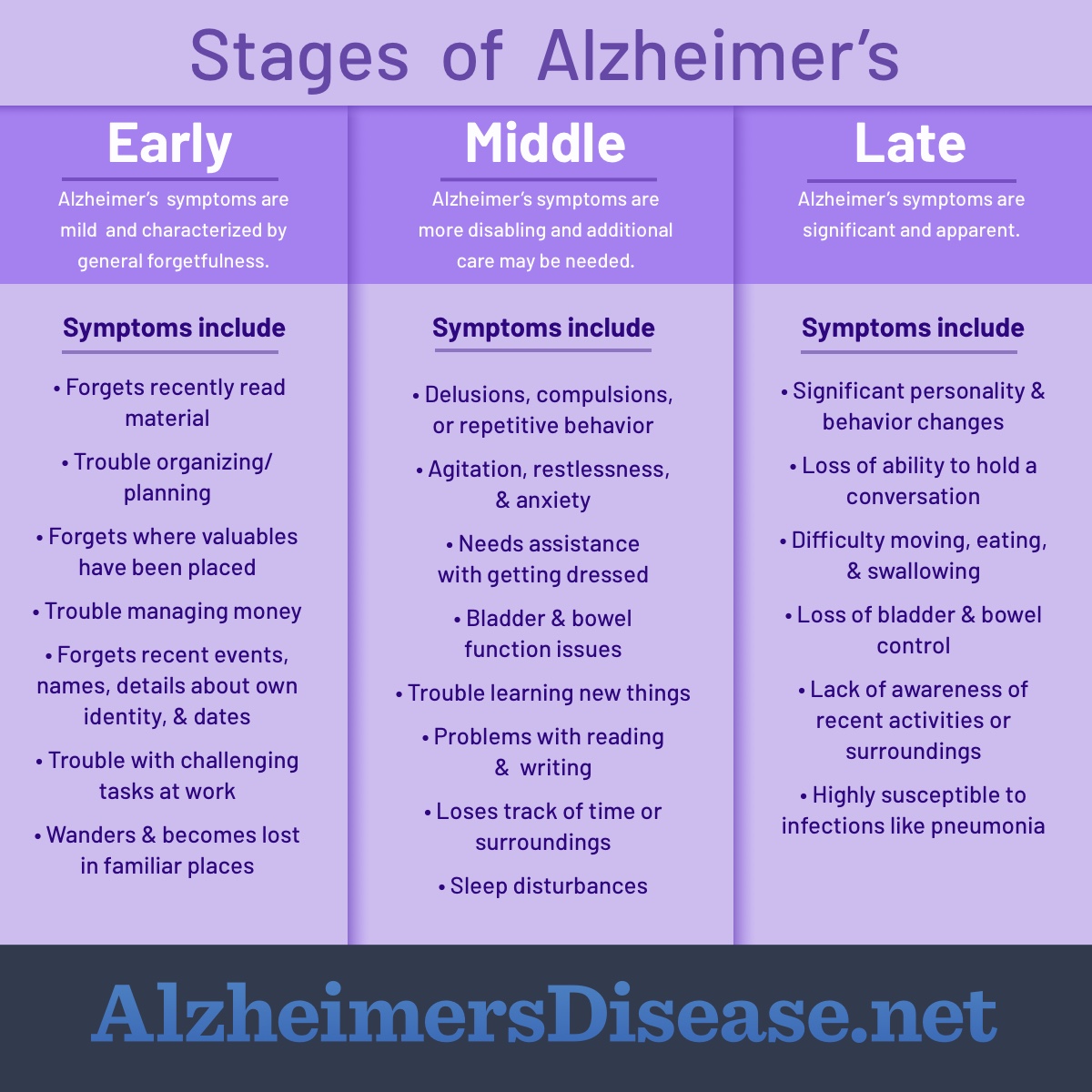 In this first stage, there is mild forgetfulness that looks like the general forgetfulness that is typical as you get older. A person in this stage can still drive, go to work, and participate in regular activities. Sometimes friends and family start to notice slight symptoms at this stage. Common symptoms can include1,2:

This is typically the longest stage of Alzheimer’s disease.2 As this stage progresses, the need for additional care might arise and get more significant. Common symptoms of this stage can include1,2:

In late-stage Alzheimer’s disease, the symptoms are significant and apparent. The ability to hold a conversation is minimal, and eventually, it might become hard to move, eat, and swallow. Round-the-clock assistance may be necessary and significant personality and behavior changes might occur.1 Other symptoms can include1,2:

As Alzheimer’s disease progresses, it comes with complications that may cause death. About half of patients die from other age-related diseases such as stroke and cancer. The other half of patients will die from complications caused by neurologic dysfunction. An increased risk of wandering or falling can contribute to broken hips, which are often fatal in the elderly. Increased susceptibility to infection leads to illnesses like pneumonia and other potentially fatal ailments. Pneumonia is a common cause of death in those with Alzheimer’s because impaired swallowing lets food or fluids into the lungs, causing infection.3 Dehydration and malnutrition are also common causes of mortality in those with Alzheimer’s because of decreased ability and interest in eating and drinking.

This can all seem scary or overwhelming. If you or a loved one have recently been diagnosed with Alzheimer’s disease, take a minute to take a breath. Talk with the doctor about where you or your loved one is at, stage-wise, and what you can expect as the disease progresses. Each person is different and being informed about the disease and the way it affects people is important, in order to be aware and prepared.