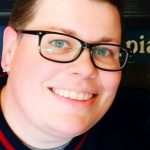 Alzheimer’s disease is a dire diagnosis. The word “dementia” sparks joy in absolutely no one. Sadness, aggravation, depression, and hopelessness can often accompany both. It’s not easy to keep pulling yourself up by your bootstraps day after day. It’s not easy to begin each day with a smile as you serve your ailing parent their morning oatmeal, lukewarm coffee (because hot is too hot for fumbling fingers), and a handful of pills. It’s not easy to shake off the violent outburst from the night before. It’s not easy, but it’s important and it’s good. It’s not an easy job. That’s why it’s so important not to get bogged down in the daily mishaps and failures, and so important to celebrate small victories when they do come.

What made him feel validated

I’m not a big proponent of lying, but I was a huge supporter of preserving my dad’s mental state. Daddy had such a hard time communicating after he had a massive brain hemorrhage. His doctor told us he had dementia shortly after. Daddy still wanted to talk to us. That, in itself, was a small victory. He wanted to talk, so he did. Now, it often didn’t make much sense to us, but it was clear he knew what he was trying to say or he thought he did anyway.

He would often string together words that didn’t seem to have anything to do with each other, but he was happy telling whatever tale he thought he was delivering, even changing his voice to mimic relatives. When he got to the final point of his verbal saga, I either laughed along with him or shook my head echoing his annoyance. I had no idea what I was agreeing with, but it didn’t matter. He needed to feel like someone understood. I didn’t understand any of it most of the time, but I understood his mood and mirrored it back for him. That was enough. That’s what he wanted and what made him feel validated.

He had done it! Victory!

We had Daddy in and out of a few facilities, and he stayed here at home for a few days between placements. My brothers and I took turns watching over him. He wouldn’t stay in bed. He kept getting up. He didn’t understand that he was at home, and didn’t know who we were at times. It came to blows that fortunately he didn’t usually land. He was a big strong man, even at that time. He became increasingly difficult to handle physically, but could still take care of most of his physical needs on his own if he could be coaxed into it.

We conned him into taking a shower one night and sat back enjoying the few moments to breathe as we listened for a fall near the bathroom door. He made it. He didn’t fall. He showered. He conquered. He also came out looking like a massive, 6-foot tall toddler. He stepped out into the hallway with his head and one arm sticking out of the neck hole of his shirt with his white hair and beard towel-dried into every direction. He was a sight to behold, but he was proud. He had done it! Victory!

This is the last lesson daddy was going to teach us. It may have been the most important one he taught us in all of his years. It was more important for all of us to be happy than to be right. If he said the sky was green with polka dots, I would have likely happily agreed. If he wanted to wear his shirt inside out, backwards, or upside down, it was fine. It was a lot easier to let things roll off than to get aggravated at him or make him feel bad for being confused.

If it was something that didn’t matter in the long run, it shouldn’t matter today. None of the nonsense was his fault, and I’m sure he put up with plenty of our nonsense through the years. Maybe he didn’t fault us too much for it either. In the end, keeping him happy kept us happy. Smile and nod, guys. Just smile and nod.