Living with Alzheimer’s: What to Expect on the Journey

Anyone affected by Alzheimer’s disease knows how challenging and debilitating it can be, especially as the condition advances from early to late stage. People diagnosed with Alzheimer’s, as well as their caregivers, often wonder what their journey will look like once they learn of their diagnosis.

We wanted to understand what that journey with Alzheimer’s looks like, so we asked our community members to share their experiences. For the Alzheimer’s Disease In America 2019 survey, we gathered insights from 63 people who are currently living with the disease and 305 caregivers. Below are some highlights from what our community shared with us.

Getting the Alzheimer’s diagnosis

Most people who are diagnosed with Alzheimer’s are 65 years old or older. Of respondents that completed our survey, the average age that people started to experience symptoms was 71.9 years old. The average age of diagnosis was 72.6 years old. 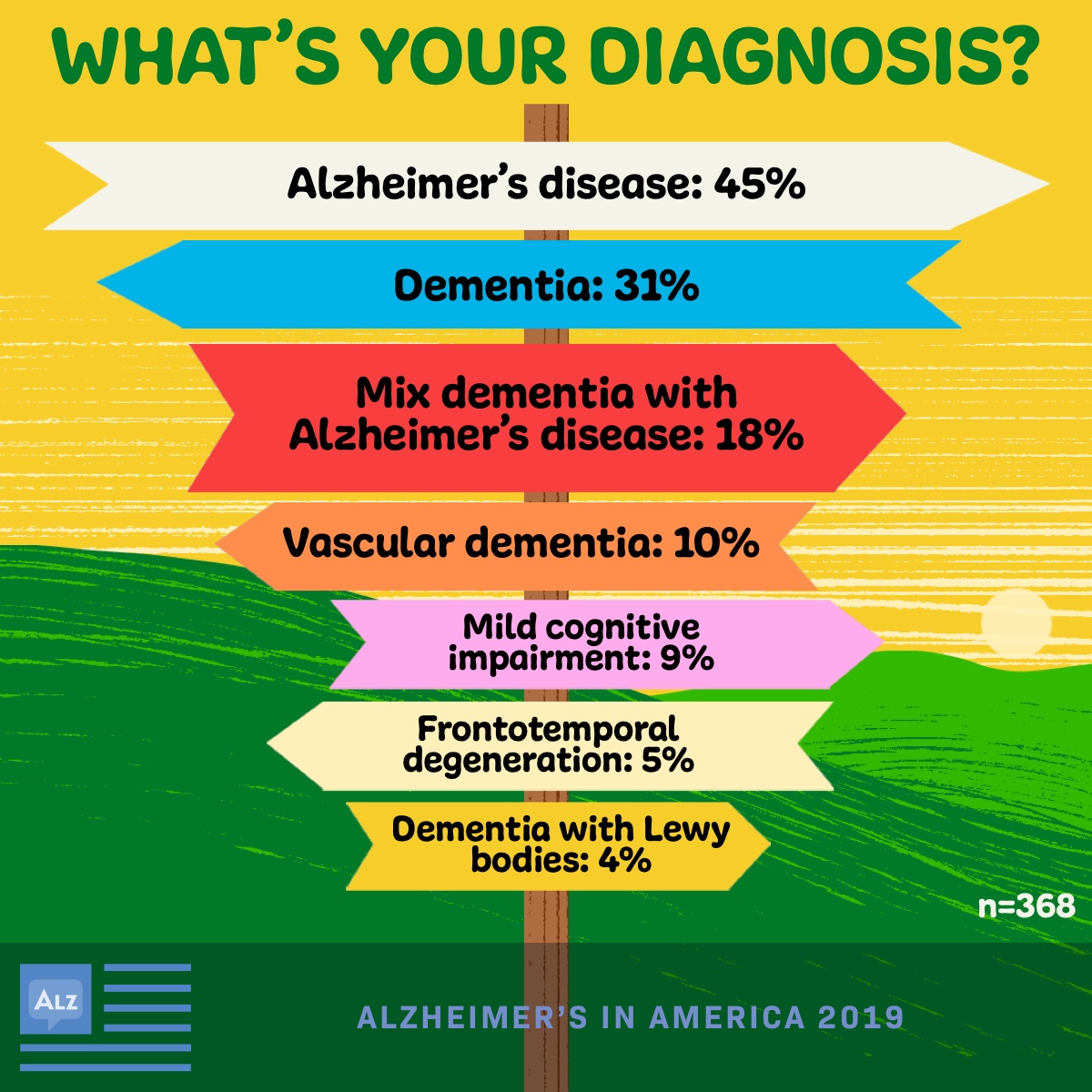 People with Alzheimer’s disease mainly struggle with cognitive impairments in thinking, memory, and judgment. However, there are also other types of symptoms that may be overlooked, such as fatigue, balance issues, vision issues, sleep issues, and loss of interest in activities to name a few. 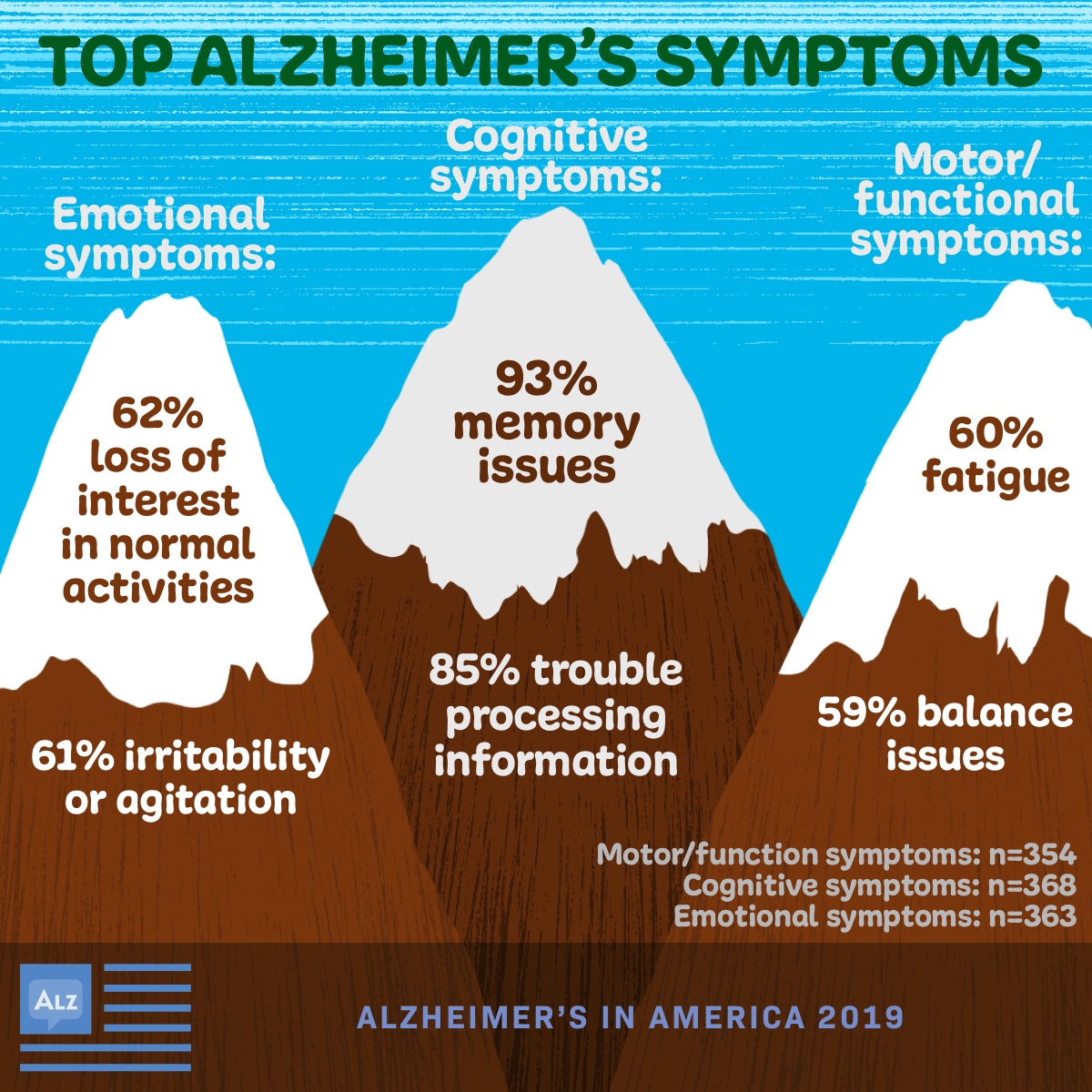 Symptoms can impact quality of life 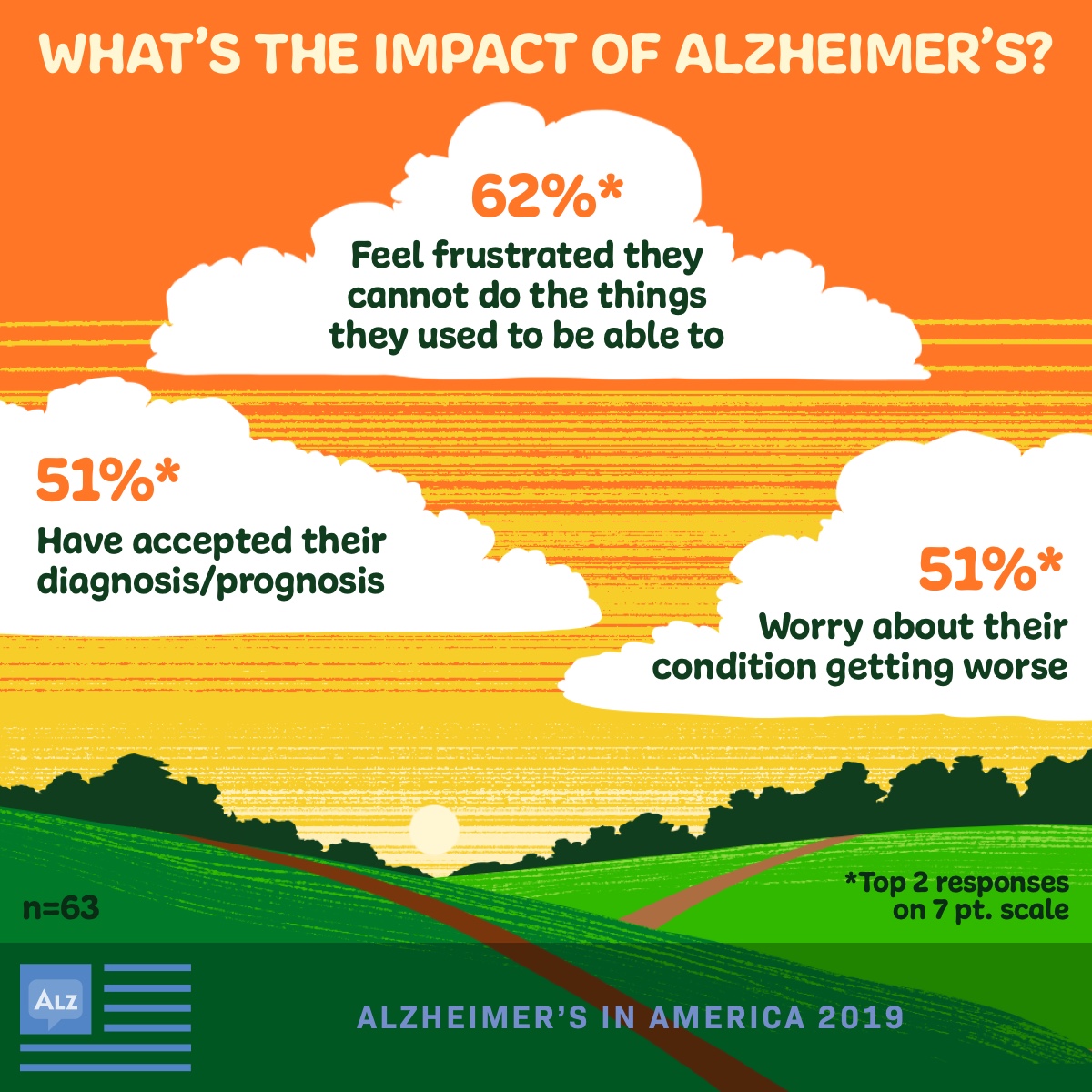 The disease affects all aspects of someone’s life, especially as the disease progresses. However, there may be ways to help cope with the loss of the “old self”. Respondents reported that they have made some lifestyle changes since diagnosis. Top lifestyle changes include socializing with others (70 percent), praying and/or being spiritual (53 percent), listening to music (45 percent), participating in pet therapy (45 percent), and/or exercising regularly (36 percent). 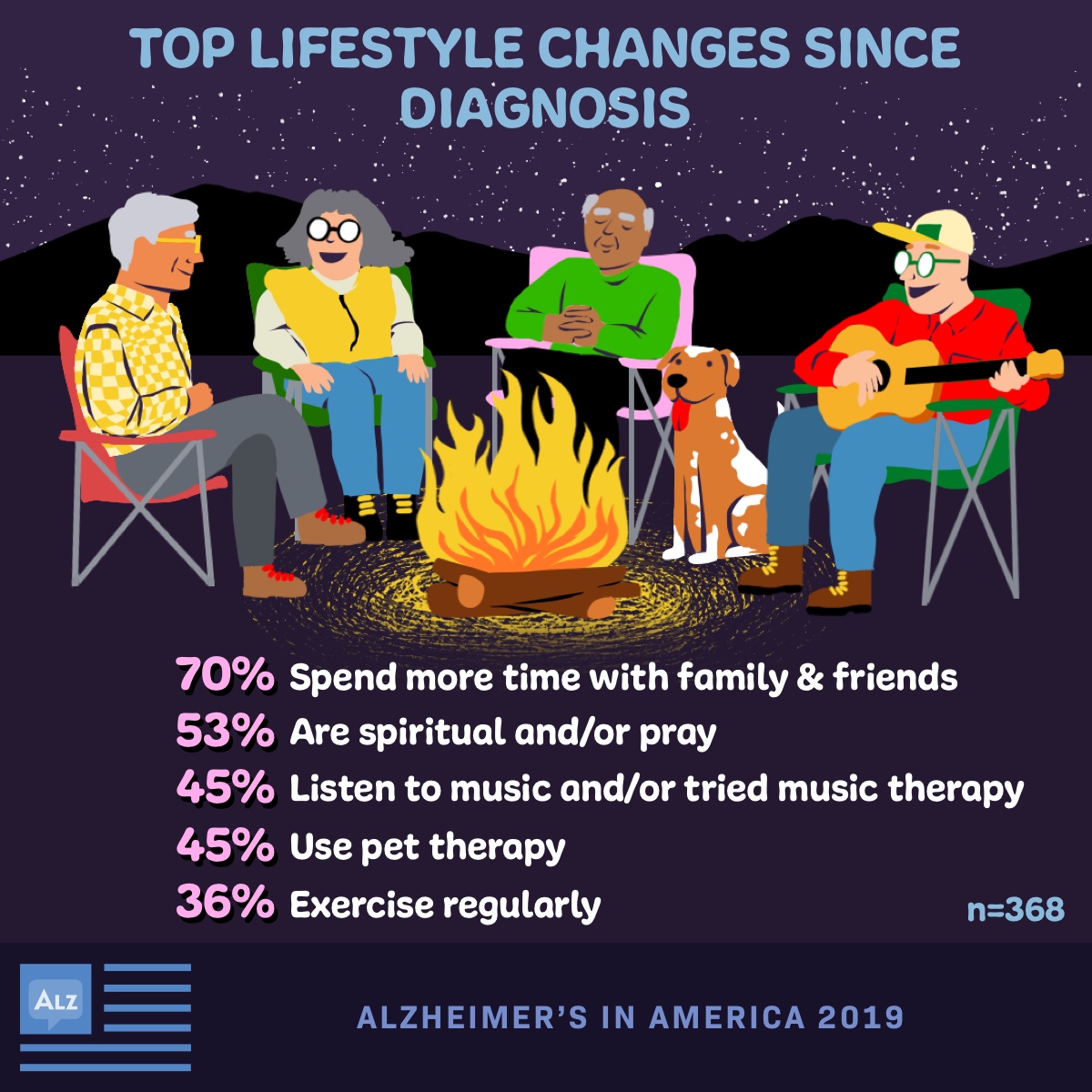 As the disease worsens, the role of the caregiver becomes more important than ever. In the early stages of Alzheimer’s disease, a person may only need some assistance and/or emotional support. As time goes on, daily routines need to be established and behavior, communication, ability to do everyday tasks, feeding, toileting, and dressing will all need to be dealt with as necessary. In late-stage Alzheimer’s, caregivers often need to provide round-the-clock care, which can be physically and emotionally draining.

A spouse/significant other (59 percent), child (38 percent), or sibling (16 percent) is the most common person actively involved in the care. These loved ones aren’t professionals and they don’t get training, so it makes sense that they may not always know the right thing to do. When we asked respondents with Alzheimer’s to give advice to their caregivers, many simply said to be more patient with them. A number of respondents also simply said “thank you”. They recognize how difficult this job can be for caregivers, and they want their loved ones to know that the care is appreciated. 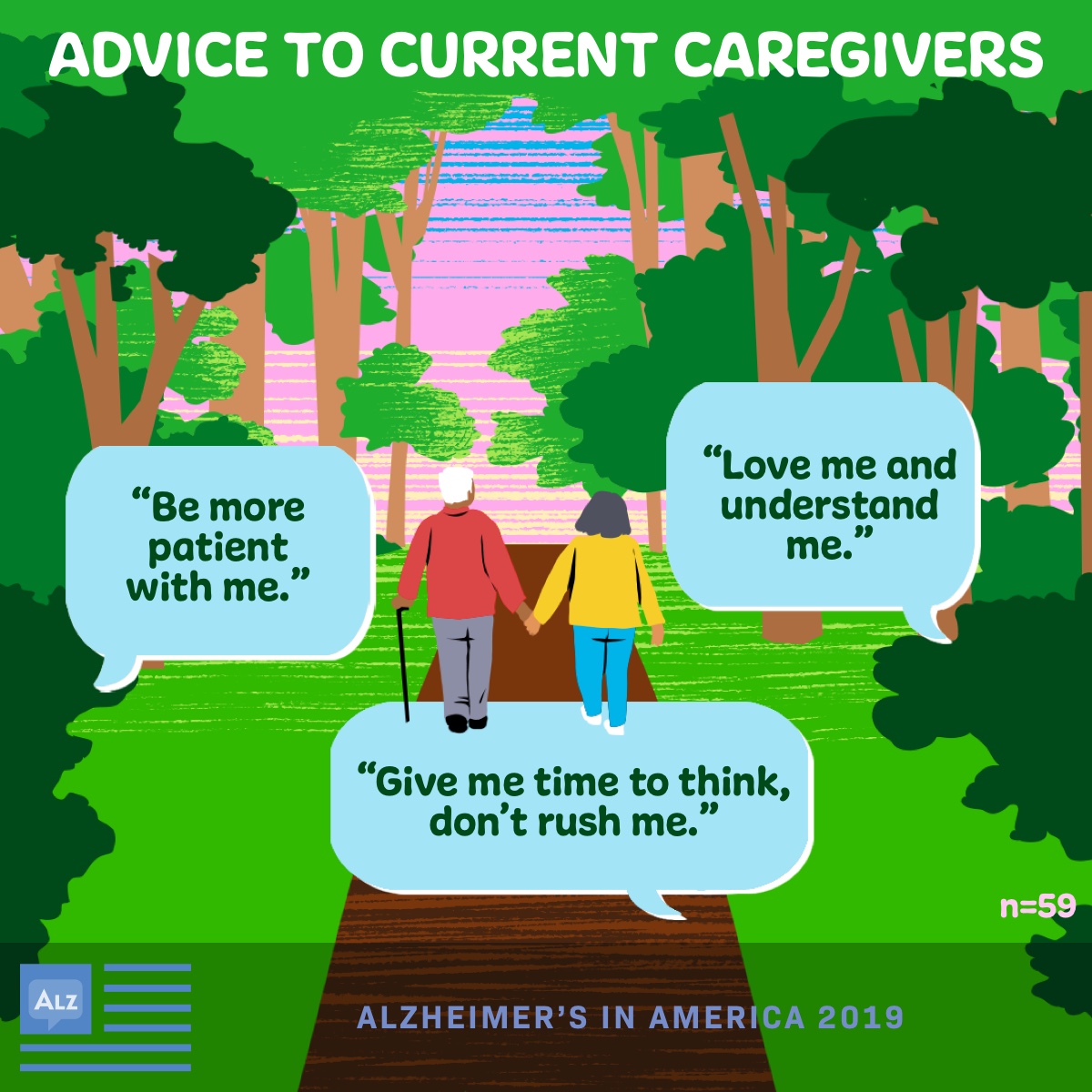 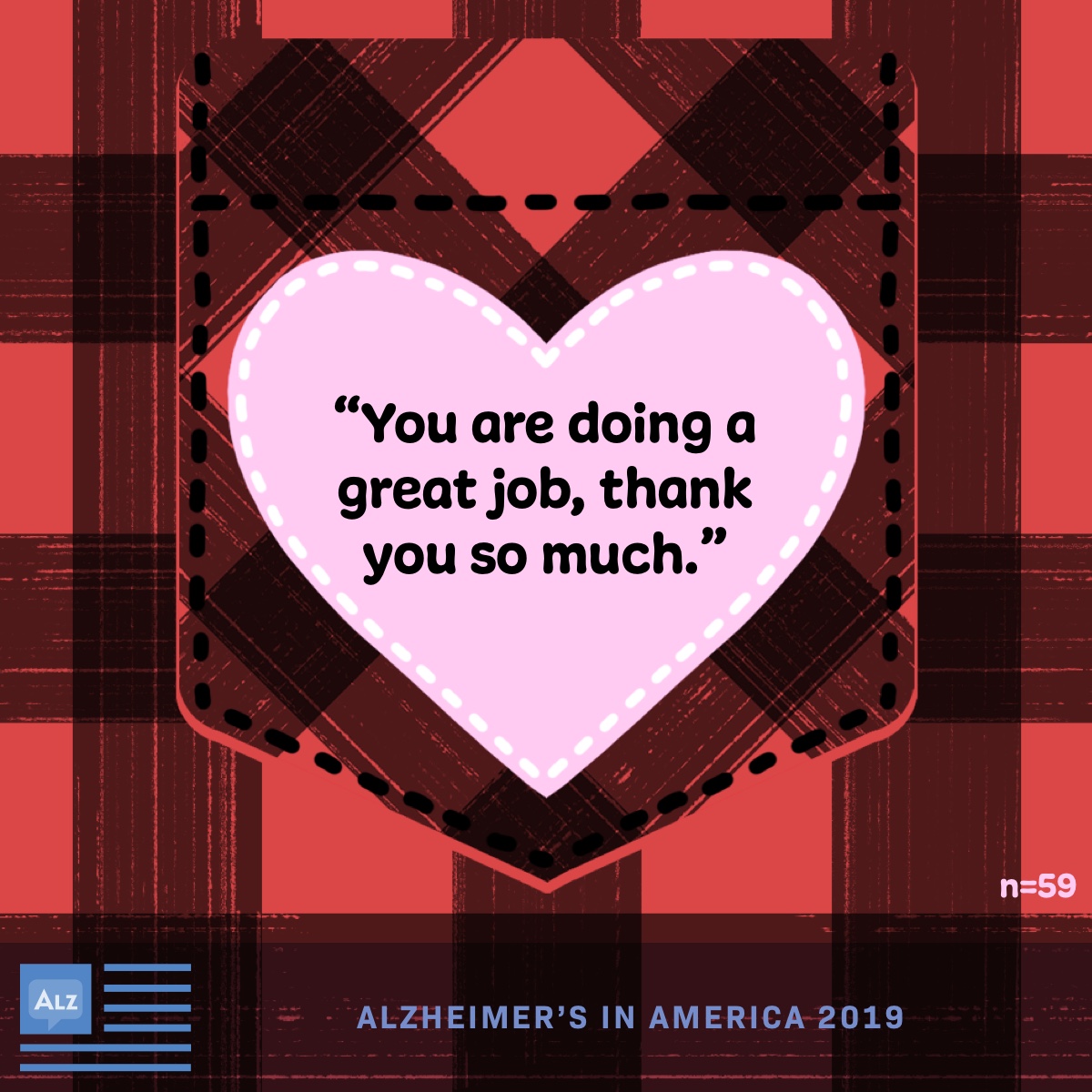